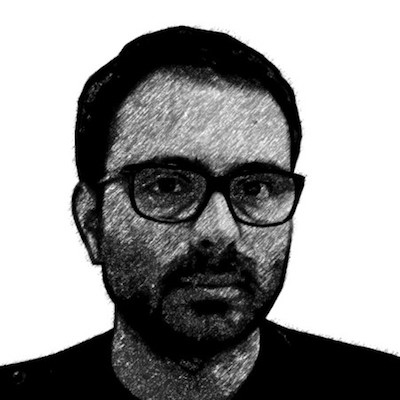 As a kid, I had the chance to play with some electronic instruments of my father and my uncles, my favorite was the oscilloscope but it was immediately overcome by the arrival of the first computers, a Macintosh (Classic II) and a PC (8086 assembled). The aesthetics and elegance of the Classic II interface counted for little compared with my Pascal lessons on the 8086 DOS console. That black screen illuminated by a few green phosphors exerted on me the same attraction that a black hole can exercise on matter. It was a real instinct for computer science for an 8-year-old kid.

Shortly after, I got in touch with Unix (AIX), an old Bull that allowed to move a mechanical arm via a serial interface. The arm was beautiful but AIX was boring and unnecessarily complicated; not happy I bought a MicroVax 3100 from the United States, my hope was to build my mail system with X.400, I had studied ISO / OSI but I had not contacted VMS. Fortunately, soon I got Slackware and its kernel 0.99, my first distribution linux. It was the beginning of an endless series of sleepless nights, which are still ongoing.

When a teenager, BBS and Itapac were the door to the new world, all that was outside the deep South where I grew up, the discovery of the Italian telecoms underground, the communication through modems, a permanent dream and a nightmare for my parents, who at the end of the month got a SIP bill. But it was the arrival of the Internet and IRC to allow me to overcome national boundaries and get in touch with the international Open Source and Debian communities. They have been extraordinary years of ferment, passion, and knowledge sharing, and have laid the foundations for an unending search and a timeless passion for technology.

After my degree at Liceo Scientifico, I moved to Pisa and attended the Faculty of Telecommunications Engineering at the University of Pisa; during my second year of studies I started working for the same University and other small local IT companies, as IT consultant and programmer, even though my field was and is still today telecommunication networks.

I was convinced that I could transform the IT of the University in the same way as Ford transformed the car industry at the beginning of the 1900s, but in a mix of ambition and ingenuity I did not count on the organizational problems of public administration and my dream was ruined but not entirely.

I worked for several years at the University of Pisa dealing with many aspects of IT at the University. In particular, as a system administrator and network architect, I was involved in the reorganization of the networking infrastructure and the consolidation of computing resources (property fiber, data centers, etc). The research and experimentation environment within the University and the GARR community have allowed me to diversify and deepen my IT skills, especially on networking and distributed computing systems.

Unfortunately, the lack of prospects for professional growth within the university world has led me to seek new experiences that have come to fruition abroad.

I started working for Canonical (Ubuntu) as a Dedicated Field Engineer within the Cloud for Telecommunications, working in some of the major telecommunications companies in Europe such as Deutsche Telekom. Much of my work was done abroad as well as most of my friends’ and former colleagues’.

As an embedded engineer in telecom industry development teams, I was able to participate in the design and implementation of geographic (European) cloud infrastructures, based on Open Source technologies like Ceph, OpenStack, Contrail, Linux, etc., infrastructures devoted to virtualization of network functions (IMS, vCPE, etc).

During my work with Canonical, I was able to address and deepen many of the issues the telecommunications industry is experiencing in trying to adopt cloud computing paradigms and consolidating existing infrastructure, including aspects related to new forms of work organization in IT domain like: devops, SRE, agile, etc.

The experience gained in designing and managing large-scale infrastructure has been an important experience that has given me a very broad picture on the issues of industrialization of the IT world and its relationship with the telecommunications world.

Simplicity, automation and scalability are the fundamental paradigms at the base of my work, geared to supporting the process of industrialization of IT, or evolution from crafts to the services industry.

A few months ago I heard about the activities of Diego in the digital transformation of the country and the challenge that he wanted to face together with the Digital Team, a challenge that has prompted me in the same curiosity and desire to disassemble the software and the computers I had as a boy. It was precisely the desire to interact with low-level digital transformation in the country to take me to apply for the position of Cloud and Data Center.

I was called for a first interview where I met the Team and later Diego. I liked Diego and the team very much, they made me hope since the beginning that a different way of working in PA was possible.

I do not conceal that the opportunity to participate in the mission of the Digital Transformation Team in the country is an important occasion which allows me to contribute, in my small, to the change of Italy. With a bit of pride, I can finally share the benefit of much of the knowledge learned at an expense and outside the country.