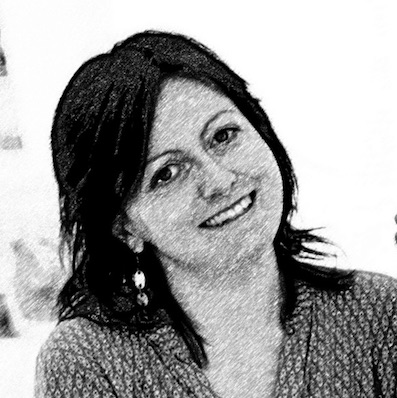 I grew up in Venasca, a small village in the Province of Cuneo, close to the French border, and in a valley which is dominated by the majestic Monviso (3841 m); the mountain is a constant reminder to the local people that by walking slowly, as the true mountaineers do, all destinations can be reached, even those where the broadband is still being deployed.

Convinced that it was the future, I decided to enrol on the experimental course,“National Plan of Computer Science”, at the Scientific high school “G.B. Bodoni” in Saluzzo. Back then, I used to go to classes with my floppy disk 3.5 and, during Pascal laboratory, we had fun by simulating a primitive form of messaging through the command “net send” of MS-DOS. After high school, I graduated in Computer and Communication Networks Engineering at the Politecnico of Turin. Very few girls were enrolled in the program; I discovered, first-hand how big the STEM gender gap was and still is.

Henceforth, I had many stimulating and exciting working experiences, both national and international. I had the opportunity to challenge myself in different fields: from software development to the planning of web applications, passing through Data integration and ending with Data analytics and Data science. After completing my studies at the Politecnico, I was offered to work for the Motorola Research Centre in Turin. I tested the first UMTS phones and developed the first apps in Java ME with the “Motorola Razr”, precursor of those smartphones that soon after would have conquered every single corner of the planet.

I spent few years for Alpitour, the biggest Italian tour operator, as part of a very competent team, working on Java Enterprise Application technologies, data integrations and the creation of the very first eCommerce B2C (Business to Consumer) web portal. For the first time, I was confronted with the world of Data warehousing and Business Intelligence which allowed me to work in banking. I then moved to Germany where I worked for Avira, a German multinational security software company that provides antivirus software. At the time, I also spent some months in San Francisco to attend a StartUp School and various boot camps on Big Data in Cloudera.

When I returned to Italy, in 2015, I wished to make my work more meaningful and help my country to become more transparent, especially for its young citizens. I worked as a Data Analyst at “Riparte il futuro”, an Italian Non profit organization which fights against corruption fostering transparency and rule of law; together with my team, citizens and associations, we carried out important advocacy campaigns. One of the most successful campaign that we launched ended with the approval of the FOIA (Freedom of Information Act), which recognizes every citizen the right to access Public Administration data and information.

I love traveling and living authentic experiences to keep always in touch with reality and to engage with new activities. I took part in some projects in Kenya and Zambia. In Zambia, I lived in Chikuni, a community with no electricity, where the children come from the neighbouring villages and gather around a solar radio in order to listen to the school lessons. Here, thanks to a CMS (Content Management System), an NGO tries to draw the government attention on the educative emergency.

I spend my free time with my family to whom I owe my education, and with the special people I had the honour to meet during my life. I share motivation and civil engagement with them; I’m an active volunteer of the local Association APICE (Association for the Encounter of Cultures in Europe) the mission of which is fostering active citizenship, multiculturalism and information on European issues, especially in the schools and civil society.

I am grateful to my country and I wish to give back and to contribute, in my small way, to Italy modernisation and to properly answer the global challenges that the country faces.

Since the establishment of the Digital Team, I have been following its work with attention and curiosity. When I noticed that it was looking for a professional profile matching mine, I sent my CV. After a round of interviews, I received positive answer an delighted about the prospect of collaborating with it. Being part of the Digital Team has always been my dream, as it is a unique opportunity to match passion, competencies and enthusiasm with a such innovative and broad project. Contributing to the DAF (Data Analytics Framework) is especially important to me because its goals; educating PA and citizens to the culture of data, using data to build up a more inclusive society, and contributing to make the country more competitive, are just some of the challenges that nurture my personal, yet shared with many young people, engagement for the future.